Pratt & Miller Engineering was founded in 1989 by Gary Pratt and Jim Miller. Their aim was to create a world-class engineering company that could take automotive-based programs all the way from concept to reality. Since then, Pratt & Miller has become a respected industry leader, providing automotive and non-automotive clients with leading-edge engineering and low-volume manufacturing solutions.

Pratt & Miller's ability to effectively manage race programs is demonstrated by the performance of its Corvette and Cadillac CTS-V teams, as well as its various customer car programs. These programs have won multiple championships as well as five class wins at the 24 Hours of Le Mans and an overall victory in the Rolex 24 at Daytona. In August 2007, Pratt & Miller signed a sponsorship agreement with InnovMetric Software for the use of the PolyWorks software suite for the reverse engineering of car components into CAD software.

At Pratt & Miller Engineering in New Hudson, Michigan, the use of point cloud data in reverse engineering applications has helped take new ideas in automotive design from concept to reality—quickly and efficiently.

Critical to the overall efficiency and accuracy of the company’s test and evaluation programs is the use of computer-generated models to provide engineering insight into design concepts. In order to create these models, it is necessary to digitize certain shapes, primarily curved body parts, and to use this dimensional information to create CAD models. In the past, Pratt & Miller technicians would build a model using individual data points and create curves manually from that data. 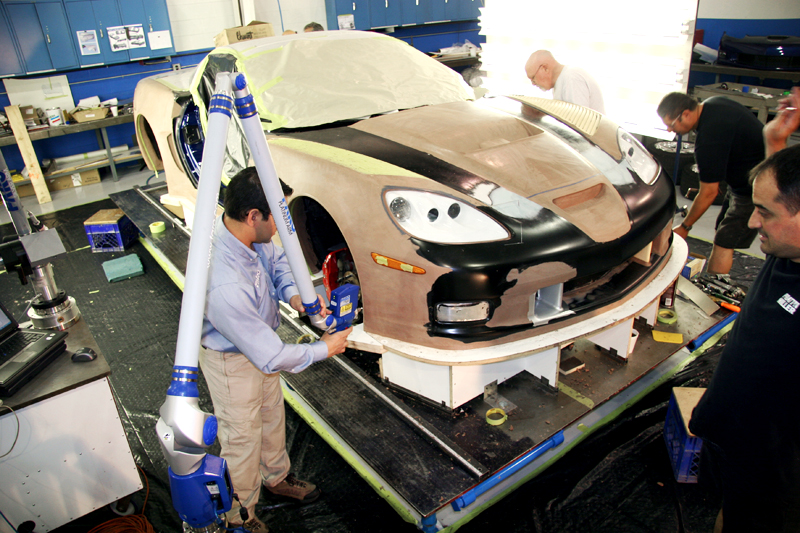 “That was an extremely time-consuming process,” said Blair Sonnen, Pratt & Miller, Engineer, “and didn’t give us the precision and accuracy we needed. If we had to redesign a part to improve its performance, we would have to build another model the same way. In order to reduce the time spent in this process, and improve accuracy, we would sometimes hire an external company to come in and collect dimensional data using the scanning process, or to create curved surfaces from the discrete point data we collected, but that was not a cost-effective way of creating models.”

Recently, the company expanded its extensive engineering capabilities with the addition of PolyWorks® 3D metrology software from InnovMetric Software Inc., a full-featured metrology software that automates and streamlines many of the operations associated with gathering and comparing dimensional data with design intent. At Pratt & Miller, PolyWorks software is being used to improve the efficiency of the company’s reverse-engineering program for its GT-1 champion Corvette Racing Team, run in conjunction with General Motors.

"PolyWorks software is a key piece in our reverse-engineering program; it allows us to quickly digitize models and get the design into our analysis programs much faster than in the past. That allows us to evaluate the design more quickly so we can incorporate necessary design changes immediately and go into production faster," Gary Pratt, Vice-President, Pratt & Miller.

In practice, design engineers create a clay model of an automotive body part, such as a fascia. The model is then scanned using PolyWorks software in conjunction with a FARO Platinum Arm equipped with a FARO Laser Line Probe, which is capable of collecting dimensional data at a rate of up to 19,200 points per second.

The dimensional scan of the clay model is taken using the IMAlign module of the software. Once the data has been collected, Mr. Sonnen downloads it to his workstation where he uses the PolyWorks|Modeler™ software to create a precise model of the part.This software can create class A polygonal models for three and five-axis milling operations and aerodynamic simulation.

One of the features of the PolyWorks|Modeler software is its full-featured alignment toolbox. “I’ll use the IMAlign module again to create a best-fit alignment of the multiple scanning paths. Then, I export the aligned scan paths to the software’s IMMerge module to create a polygonal mesh that graphically defines the shape of the scanned part,” Mr. Sonnen said.

At that point, he goes through an iterative process, combining models. The combined model is then imported to the IMEdit module to correct imperfectly digitized geometry using flat and curvature-based hole-filling procedures. From there, the model goes to curve network creation and automatic NURBS surface fitting. The rapid surfacing methodology delivers an optimized and usable NURBS surfaces to the Pratt & Miller’s Unigraphics CAD software. 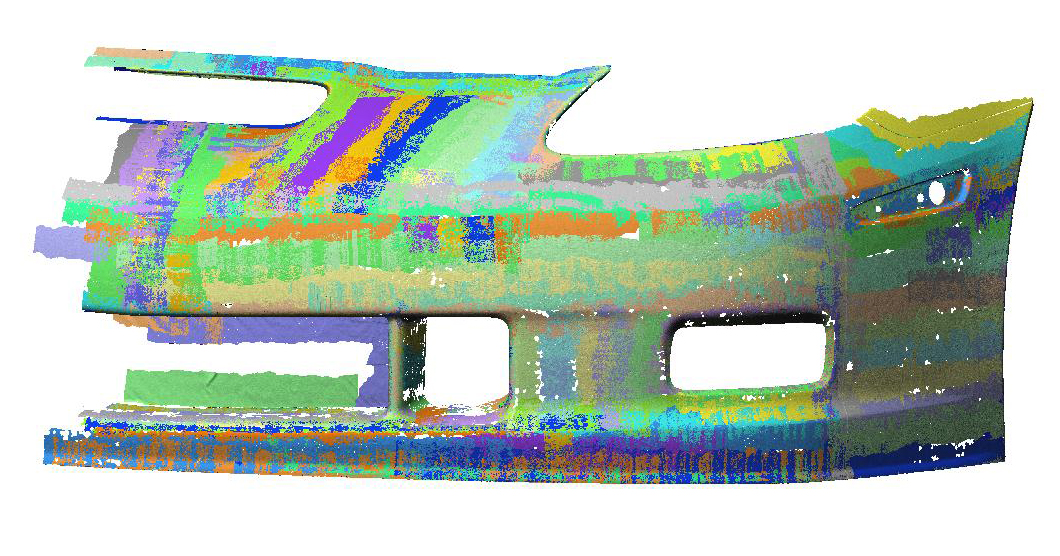 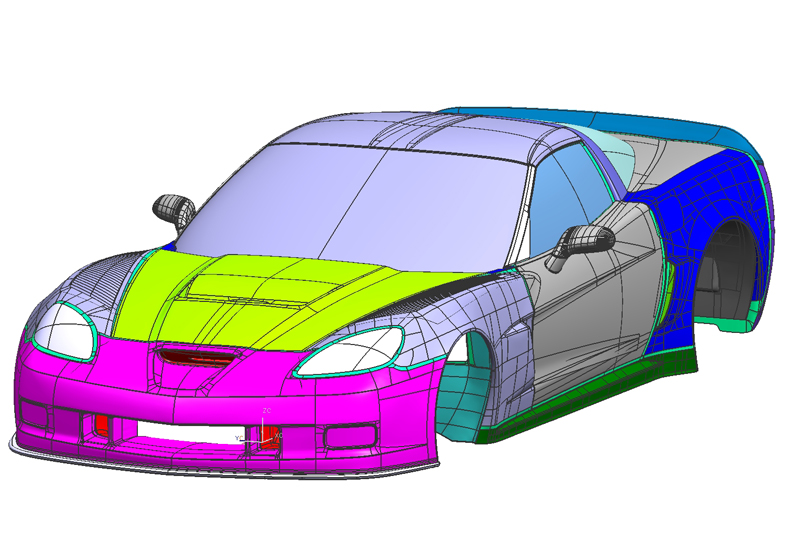 It is in the areas of polygonal modeling and rapid surfacing that PolyWorks software significantly reduces the time and cost of less-automated methods of creating models for analysis, according to Mr. Sonnen.

Using the CAD model, Pratt & Miller engineers can subject the virtual part to a full complement of performance evaluations including advanced CFD tools to analyze the aerodynamic impact and flow field structures of vehicles as well as the company’s proprietary Automated Dynamic Analysis of Mechanical Systems (ADAMS) model for virtual track simulations. Based on the evaluations, part design can be improved incrementally before production tooling is produced, resulting in significant savings in time and costs and a dramatic improvement in vehicle performance.

It seems to be working. The Corvette Racing Team has scored successive championships in the American Le Mans Series and impressive finishes in the Rolex 24 Hours at Daytona and the 24 Hours of Le Mans. In the process, Pratt & Miller has created an engineering approach to performance design that has wide applications for original equipment manufacturers in the automotive, aerospace, and marine industries.